I've Released the First Game I've Ever Made! Onto the Next 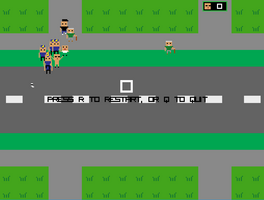 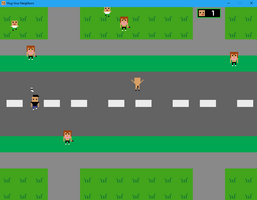 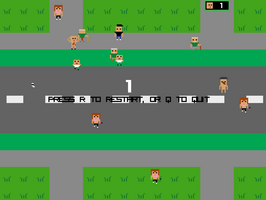 A few months after the shower than changed it all, I've finally released the first game I've ever created.

Hug Your Neighbors is a simple game which puts you in the middle of a neighborhood street and tasks you with hugging as many neighbors as possible. While getting hugs from strangers is surely exhilarating, you must also be careful not to hug the wrong person, or your hugging streak will end. This is a silly, simple game, and I didn't come up with the idea until the middle of mindless developing nothing. I was getting bored quick. I was getting bored of putting in code and drawing sprites for no reason. The project started out with no intent on making it anything -- Just create a sprite, and some walls to test out collision and movement. Then I wanted to test out simple AI. I didn't know what to do, and since I was boring myself, I decided to make the drastic change that you ultimately see here today.

Now I move onto the next project. I have no idea what it will be, but for now, I want to test out more complex AI, and collisions with walls. I also want to draw other things. As for the RPG, I've already started doing research for it, and will eventually start doing code for movement and collisions.

Get Hug Your Neighbors